The Hellenic Institute of Architecture has a series of lectures by Greek Architects which take place every month, for the last 13 years, at the City of Athens Cultural Centre, Akademias 50. These lectures carry a considerable weight within both professional and university spheres. As of this year the Hellenic Institute of Architecture, in collaboration with the ‘House of Cyprus’ has embarked on a series of these lectures by Cypriot Architects. The first to feature was Zinonas Sierepeklis.

Eraclis Papachristou followed up with a presentation on Thursday, 19th May, 2016, in which he presented his position on architecture. The title, ’19 years of Architecture’. A graduate of the architecture school of Salonika, followed up by a Masters at the Bartlett School of the University of London he has been practicing in the field since 1997, in Cyprus. In 1998 he opened his own office, Eraclis Papachristou Architects. Since then the practice has been awarded 24 prizes in national and international competitions. Ten of these were first prizes, most of which have been completed or are under construction.

The task of architecture is ‘to make visible how the world touches us’ (Juhani Pallasmaa) and this is also not a static statement. We evolve; we read situations and words differently with the passage of time. It has always been important to the office of Eraclis Papachristou Architects that designs and projects, ideas even move with the times, that there is a high awareness of how material, technology and other forces influence and transform architecture. This runs in tandem with the absorption of sufficient technical knowledge to allow for the execution of works that maintain a high standard.

Despite this constant re-invention the practice has managed to create an image, a recognisable interpretation to architectural solutions at a great variety of scales and through an increasing number of functions.  The lecture was then also presented as part of the ‘Architectural Dialogues’, of the Cyprus Architects Association on the 3rd November, 2016. 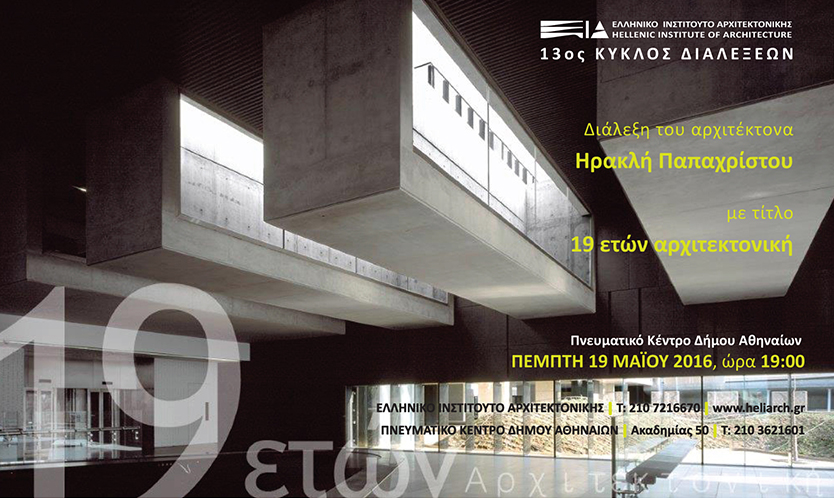